I cant believe its been four days since I’ve posted. My humblest apologies, readers.

It’s been busy, busy in this house. I’m not making excuses, but everyone’s been coming & going since Friday, its been chaotic On Friday the 21st, my youngest turned 14. I still can’t get over how my cute, chubby wee baby has grown into the intelligent, athletic & beautiful young woman that is our Niamh.

Alas, we had no time to celebrate, as the kids were heading to Uist to visit family with their Dad. As he lives in Glasgow, he had a major amount of driving to do over the last weekend. But he was outside our house at 9 on the dot & off the adventurers went. I had an hour of quality puppy time and then headed down to pick up Poppy.

If you follow me on instagram, you’ll know that the dogs did cuddle up on the sofa. Once. What really happened was that Poppy fell asleep and Jax sneaked up & snuggled in inch by inch so he wouldn’t wake her! Also, he moved before she woke up, so she may be completely unaware he sneaked a cuddle. I’m glad I got a photo, as I might not have believed it myself. 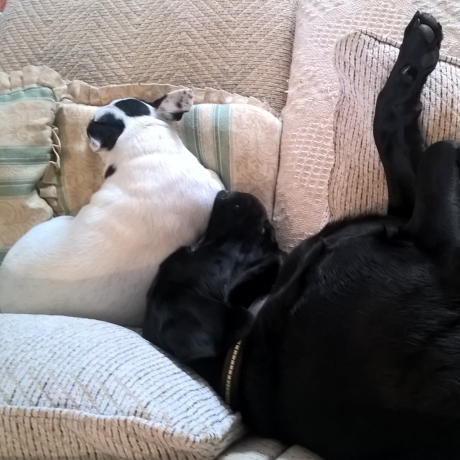 The rest of the time they were playing, chasing each other, hitting each other with toys (I didn’t know dogs did that!) As Poppy is a, shall we say, lady of a certain age, our walking schedule was tweaked to include a lot more breaks to sniff. We still had a wander round the golf course & our favourite saunter along Cow Road, it just took a little longer.

Although Pop normally sleeps in mums livingrooom, she didn’t settle in ours, crying & crying til we took here upstairs with us.
DID YOU KNOW- a Labrador & a Jack Russell breathing in their sleep sounds EXACTLY like an axe welding serial killer. Neither did I, til 3am Saturday morning 😦

We had a lovely 2 days, just my other half & I, with a big dog & a little dog, having nice relaxing walks in the sun.

Needless to say, I’ve been too busy taking care of the dogs to do any crocheting.

Poppy went home teatime Sunday. I suspect both dogs were happy to have time alone by this point, she was asleep soon after getting home & Jax was out like a light for a change, even sleeping through the kids walking in the door. He’s a really rubbish guard dog, lol.

The kids got back late Sunday night, full of stories of the Islands. They had an amazing time and were exhausted. It was over 400 miles 🙂 I’m full of admiration for their uncle & his family. I found it hard leaving a city to live in a small town like Berwick, so I can’t imagine adapting to Uist, although both girls did say they could understand how people could live that far from the mainland. Lots & lots of photos were taken!!

It was really late by the time I chased them to bed, they were knackered. So much so that we all slept in this morning & they ended up with an extra day off school(oops!)

Now everyone’s back where they should be, we’ll be back in our normal routine tomorrow. Fingers crossed x